Monument to the Fallen Fighters of the Revolution, St. Petersburg, Russia, area converted by the Petrograd Soviet from a park to a burial ground after the February Revolution, dedications 1917-1919.

Future remorse will not offset belief in the fast, immediate reward. War is not deterred by future remorse concerns.  The issue boils over in theories where issues collide:  is the conflict for a) survival; as in disaster;   or b. turf -- as in "we want what you have" and that's enough. Read "When the English Fall," by David Williams 2017.  Read the NYT review at https://www.nytimes.com/2017/08/31/books/review/when-the-english-fall-david-williams.html. Amish and conflict.  What are limits, and options, for pacifism.

The violent ones.  What is the role of remorse:  Is remorse just because an imposition effort failed? Or because it now is known as morally wrong. What penalty. Does remorse as to the outcome of one war, deter another? Or lead to a greater effort next time, a learning from "mistakes" that led to defeat. War goes on.
. 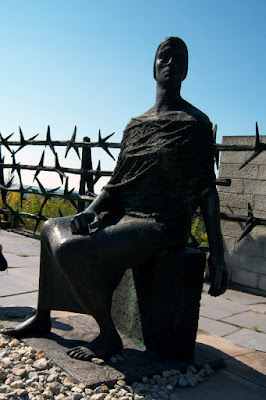 Germany is not alone, although much focus in the west focuses there, see Germany Road Ways.  Buchenwald
.
Posted by Carol Widing at 6:48 PM No comments:

Words start wars. Listen only to the horse. Ignore surrogates.

Hashtag #speakforyourselftrump. The emergent pattern of this pending presidency is for Trump to tweet. Surrogates then fan out to explain, interpret, calm, complain.

Stop it. Listen only to the horse. People, turn off your devices when anyone other than the horse's mouth is speaking. Opinion is not news without clear advance groundwork of fact. What facts does the opinionator agree with before expressing the opinion. Sounds like a courtroom. It is. You are not qualified and your opinion is excluded if not set up that way., what was intended, what was said in full.  Let the speaker speak. Surrogates: just a shield, a testing ground

The process of bandying words works to get rich made Trump rich, including with advice not to speak for yourself. Instead, send someone else when? Whenever the task is not fun for you. The important thing in getting rich is to have a good time -- good time patent that?. See Trump's book, Trump: How to Get Rich by Donald J. Trump, Meredith McIver 2004at pp. 65-68.

Any leader must be wary of the Big Lie, the political idea on which the leadership itself relies, and that people may initially believe because a) it gives them and their issues personal attention, at last; b) they want to believe it; and c) proof lies beyond their immediate experience so they must rely for truth on the speaker. The Big Lie, however, will fail because over time the experience of the people themselves does not support it; or, after the scapegoated group is removed or better controlled, the problems continue. It sounded good, the bells and whistles sounded as well, but it did not ring true over time. 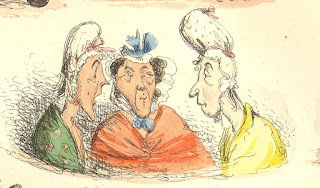 The Big Lie. From an old unsigned print of ours.

Time does run out, but not in time for damage to become virtually irreversible in factors needed for stability and productivity.  Categories:  gender, race, ethnicity, religion, endless.

Objecting to the process  of persuading people who feel deeply aggrieved and can be manipulated in whom or what to blame,  is not new, see Ethics and Elections at http://www.scu.edu/ethics/publications/iie/v7n3/demonizing.html/ Why bother pointing it out when there is never any change?  Good question. Persist anyway.

1.  The big lie is integral to propaganda.  When you hear it, discount it.

Persuasion relies on it where the immediate goal is engagement of emotion before facts are examined. An obvious example from the last century is, yes, Adolf Hitler ranting and scapegoating Jews, see overview from Mein Kampf at http://www.historiography-project.com/misc/biglie.html.  While we are there, see also Goebbels, https://www.jewishvirtuallibrary.org/jsource/Holocaust/goebbelslie.html
2.  Following the Big Lie will come the comeuppance.

Evidence of failure of a big lie:  When the scapegoat is indeed removed, the problems remain. Or the people see that their own former friends and neighbors, now scapegoated, did not fit at all: there was deceit, misleading in their leaders, those they had trusted. Then comes voter vengeance, reversion by revolution, rebellion, or mere subversion over time, a steady drumbeat undermining the forced party line.

Autonomy depends on accurate information on which to base decisions.  Everyone needs the Turul to watch out for truth in the politics. 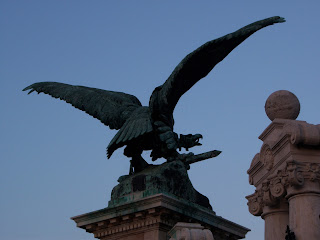 Budapest.  The Turul, Guiding Spirit of Magyar Autonomy
Posted by Carol Widing at 6:32 PM No comments:

Labels: as Big Lie, ignore surrogates, listen only to the horse, supremacism fails over time, surrogates as shield 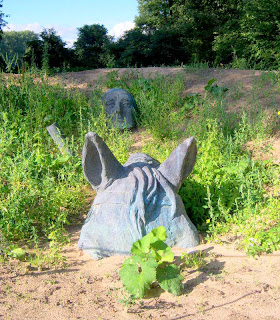 Concept: serendipitous idea that slave under Roman law had right to freedom upon return. Trigger here:  Battle of Teutoburg Forest,

1.  Jus postliminii. Civil law. Someone whose property or former condition (such as free status)  has been taken, may, upon getting it back, be considered as though there had been no interruption in possession or enjoyment. See The Law Dictionary (right of postliminy). International application, broadly -- States may come to agreements for matters like this, for their mutual benefit. See site.

2. Roman history sources, relevant to overall topic of the times. See http://www.livius.org/articles/battle/teutoburg-forest-9-ce/teutoburg-forest-4/, site named for Livius, or Livy, Roman historian: map, archeological and historical detail.  See Livius, or Livy, Roman historian, on the Teutoburg Forest
3.  Topics, people, concepts. The significance of the issue and application is debated, arising apparently from treatment of Roman prisoners after their devastating defeat at Teutoburg Forest, where full Roman Legions were defeated by Germanics.  See Germany Road Ways Varusschlacht and other posts.


4.  Ius postliminii -- Is this it and no further? Slave under Roman law had right to freedom upon return,JSTOR, details from both sources require subscription.  Off to the library. Meanwhile, see The Law Dictionary (right of postliminy, to be treated when restored to a possession or status, as though you never had lost it).
Posted by Carol Widing at 8:01 AM No comments:

Why study war. Study war because it is waged with your money.

Why Study  War.
Study war even though its proponents may be untrackable, as are its profits, because it is our money and our lives are at stake.
. 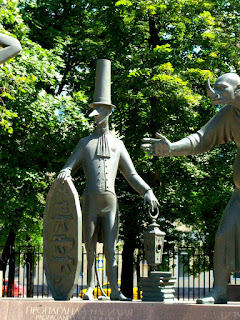 Propaganda of violence. Sculpture in grouping: Children as Victims of Adult Violence, Mihail Chemiakin, Moscow
.
1.  Study war, and on your own rather than taking someone else's word for its merits in any particular case. Weigh policy against the self-interest of the proponents or opponents. Vetting is basic to forming a remotely autonomous opinion. Seek out facts behind policy, and the businesses or groups that will benefit substantially and financially from that policy. Who gets what contracts. How to assess going to war. For whose sake.  You may find you support the ones waging your wars.  You may not.

a. Research beneficiaries of war. Not easy.

(1)  The many lives of Blackwater.  Start with any company obviously making money from the first-recourse end of the violence spectrum:

An obvious such company is, or was, Blackwater, founded 1997, that became Blackwater Worldwide, providing mercenary and special security services all over.  Is it reasonable to want to know what profit over expenses it gains by providing its services, and to whom. What is taxed and where. If divisions, or the entity as it now is formed, is a "foreign" entity, where. All this is beyond the ordinary voter, but following dots can lead to conclusions whether reasonable transparency is provided to those who elect the officials who put out or approve contracts with our tax money.

In 2009  Blackwater, as I understand the sequence, morphed into a new-name company, Xe, after Blackwater operatives were charged with crimes in Iraq, see finding of guilt and sentencing in 2015 Washington Post on Blackwater.  In 2011, Xe changed to another name (did ownership, principals change?), Academi LLC, see WSJ:  Academi LLC. The LLC offers limited liability for misdeeds, see Internal Revenue Code.  A broad look at the industry it serves and its progress: see http://www.rightweb.irc-online.org/profile/Blackwater_WorldwideAcademi LLC.  Academi LLC then became a division of yet another company, Constellis. See websites with information to see the careful obfuscation of identifying information for contacts, individuals behind.

(2) Research what the money is and where it goes.  Mwah-ha-ha-hah.  Study where the money goes? Life's great futility, but try. Chart out people, names of banks, all that. See what you find. Make a wallbanger: a newsprint on your own wall. What banking organizations, where, what are the profits, where are they taxed, who is accountable. What interlocking directorates, officers, systems. Don't wage war without it.

b.  Include study of each think tank expressing its opinion.  What is on the shield of the persuasive one:

c,.  Legitimate question. Ask if it is human nature, or human will, that drives war.  If it is nature, are we stuck. Can we re-set our children.  If it is will, what is in our way. Profits? Power too far tilted in favor of them?  Either way, can the alternative of mutual and reasonably fair containment, survival-sustenance-sharing of resources, work, combined with the force of economic sanctions.

d.  Study war because we do have will.  Aggression, culture to overcome, can itself be leveled enough for mutual survival overcome if we want it.  That leveling comes at the expense of those who have put themselves on top through exploitation, force, however. How to bell them?

Posted by Carol Widing at 8:31 PM No comments:

Labels: Academi, Belling the Cat, Constellis, let us count the ways, study war because it is waged with your money, the many lives of Blackwater, to contain it, why study war, Xe
Home
Subscribe to: Posts (Atom)